She Had Never Heard Of Adam And Eve: A Favorite Soul winning Experience from Jack Hyles

She Had Never Heard Of Adam And Eve: A Favorite Soul winning Experience from Jack Hyles 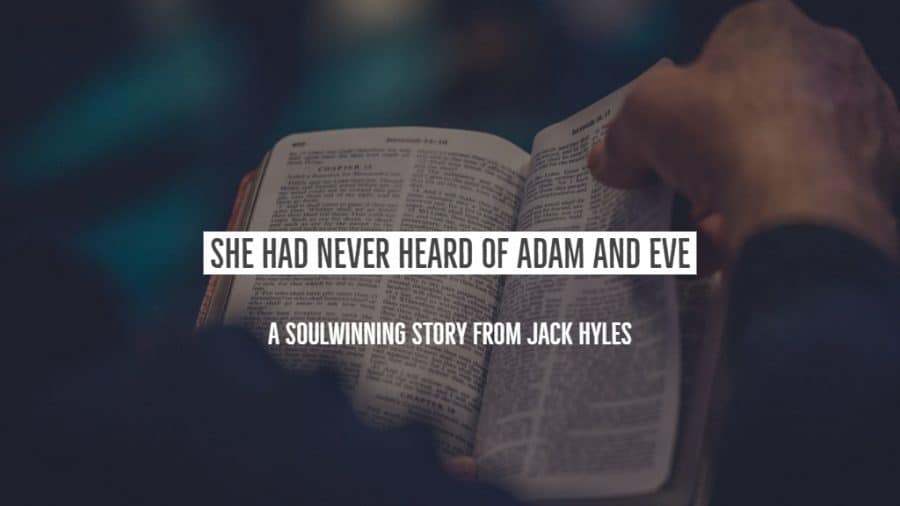 A few days ago a lady in our area whom I had won to Christ died. Upon hearing of her death, I relived the experience of her salvation.

One Friday afternoon I went to her home and found immediately that she was a Catholic and had been reared near Rome, Italy.

(She was in her mid-fifties when she died.) After chatting with her for a while, I brought up the subject of her salvation only to find that she knew absolutely nothing about the Bible. So I started from Adam and Eve and explained salvation’s story to her in detail.

I told her that one time God made a man named Adam and a woman named Eve.

“Is that right?” she replied.

“Yes, He made Adam out of dust and He made Eve from Adam’s rib.”

“Well, isn’t that unusual!” she replied.

“Then God fellowshipped with Adam and Eve in the Garden of Eden.”

“Then one day something happened. Adam and Eve did something wrong. They ate the forbidden fruit and ran from God’s presence and were spiritually dead.”

“Oh, how sad that they did that,” she remarked.

Then I proceeded to tell her that immediately God promised He would provide a sacrifice through the seed of woman. I told her that Jesus was that sacrifice and that He died on the cross.

She could hardly believe what she heard. “Isn’t that nice! That is so fine.”

Then I proceeded to tell her that He died for her.

“Oh, that makes it better.”

Then I told her about Heaven, and she could hardly believe what she heard.

When I asked her to bow her head and pray the sinner’s prayer, she did so gladly but unconsciously prayed in Italian. When she finished praying, she looked up and asked, “Am I saved now? Will I go to Heaven when I die?”

I told her that if she had put her faith in Christ as her Saviour, she would go to Heaven.

“Well, I just did. Didn’t you hear me?” She did not realize she had prayed in Italian.

I replied, “Maybe you did and maybe you didn’t. I heard you pray but I have no idea what you said.”

You should have seen the look on her face when I told her that God knew Italian very well and that He had heard her prayer and saved her soul.

She seemed pleased not only that she was saved but that God was so well educated.

Happily, she came forward the next Sunday professing her new-found faith in Christ. Though she died soon after, she no doubt is in Heaven having some “Italian fellowship” with Christ.